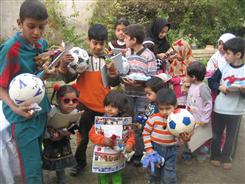 Baghdad Conference on Iraqi Orphan Crisis.  SICF co-hosted an April 2009 conference in Baghdad on Iraq’s orphan crisis.  The conference was attended by numerous Iraqi NGOs, Iraqi parliamentary and other officials, the media, and an American delegation.

Training for Iraqi NGOs caring for thousands of orphans.  Immediately after the Baghdad conference, SICF was asked to develop “capacity building” training for Iraqi NGOs and responded by inviting The Children’s Village (CV) of New York (www.childrensvillage.org) to be a partner in developing the program.  In October 2009, SICF and CV sent a team to Baghdad to meet with Iraqi experts on the orphan crisis and to deliver two days of introductory training to 30 Iraqi NGOs serving orphans.  The Iraqi NGOs also met with the Iraqi Prime Minister who expressed support for their efforts in caring for orphans.  To ensure that the SICF and CV training initiative is led by Iraqis, meets the needs identified by Iraqis themselves, and is culturally relevant, a panel of Iraqi experts has been established and convened its first meeting with SICF and CV in Baghdad.

City Dump Orphans.  SICF is providing monthly support (food, clothing, etc.) to orphans in displaced families living in the Baghdad City Dump.  SICF provided a sewing machine for one destitute widowed mother which has helped her move from dependence to self sufficiency by earning an income as a seamstress to meet the needs of her children.

Clinic in Baghdad.   SICF has provided thousands of dollars of medical and dental supplies to a clinic in Baghdad to help needy orphans and widows.   American junior high students also sent $325 to SICF to provide “goodie bags” of food, socks, toothbrushes, etc., to needy orphans who come to the clinic.

Orphan Theater Group.  SICF provided funding to a theater group for young orphans, directed by an adult who himself was orphaned as a child.

SICF began its work as a humanitarian assistance organization, offering concerned Americans as well as Iraqis an opportunity to take concrete action to help Iraqi orphans.  A banquet organized in September 2007 in the IZ drew support from Americans and Iraqis, and generated approximately $15,000 in seed money for the SICF.   Initially, many caring Americans in the United States, at the US Embassy in Baghdad, and other organizations provided volunteer assistance in the collection and distribution of food, medicine, school supplies, backpacks, shoes and other items.  SICF has also provided computers to several organizations serving orphans.

In April 2009, the SICF co-hosted a conference in Baghdad on Iraq’s orphan crisis that was attended by approximately 61 Iraqi nongovernmental and community organizations. 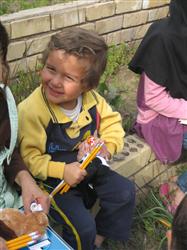 The most urgent issue emerging from the conference was the need for capacity building training for Iraqis in order to expand and improve the delivery of services to orphans in their own local communities.  To address that need, the SICF has invited experts at the Children’s Village in New York to begin developing such training.

A “LifeBook” project in which community care workers would be trained to help orphans create scrapbooks or journals of their families and heritage, by collecting pictures and stories about deceased parents from relatives, neighbors, and others in the community.

A leave-behind “toolbox” for community care workers to give to adult caregivers in the home (e.g. widowed mothers, grandparents, aunts, uncles, extended family members) that would use recreation, storytelling, and other family based activities to reinforce principles of belonging, inclusion, compassion, and hope.  A centerpiece of this toolbox will be a unique book designed specifically to help Iraqi orphans understand and cope with their circumstances.

Preparing community care workers to train adults in the home in basic skills that would help them connect certain behaviors exhibited by orphans to underlying needs and feelings, create safe spaces, and encourage pro-social interactions, through the use of such tools as a “care bear”.

A leave-behind “toolbox” for community care workers to give to adult caregivers in the home (e.g. widowed mothers, grandparents, aunts, uncles, extended family members) that would use recreation, storytelling, and other family based activities to reinforce principles of belonging, inclusion, compassion, and hope.  A centerpiece of this toolbox will be a unique book designed specifically to help Iraqi orphans understand and cope with their circumstances

The mission of the Iraqi Children Foundation is to assist the families and communities of Iraq by mobilizing a life-changing “Surge of Love” for millions of children orphaned by violence in Iraq. We are committed to doing this under the leadership of the Iraqi people by: ICF, a tax-exempt 501(c)(3) nonprofit organization, ICF was established in October 2007. Click below to learn more about who we are and what we do.